My Semester Abroad – The Adventure Begins

“Give me a ticket for an aeroplane…” This song was inappropriately playing in my head on 19th October 2012 when I, ticket in hand, nervously boarded the plane headed towards New Delhi. Before me lay a place that I had once visited on the fly-through to Varanasi and back. It was practically unknown territory holding an uncertain future. I felt a sense of adventure and trepidation because I could not be sure that everything would be okay. Sure, you know that I survived, since it is now 2018, but I wasn’t so sure of that. I felt prepared for anything, just not entirely ready for it – this being the first trip I was to undertake on my own in all my life.

(Concerning the pictures in this and a not yet written amount of blog entries: I used a small, old compact camera and my mobile phone during my semester abroad. I know, it would have been better if I had gotten myself a good camera for such a once-in-a-lifetime trip, but I sold my old car to get to India… I didn’t have the money for a new camera at that point. Therefore, please excuse the often grainy pictures.)

I undertook this trip during my semester abroad. My study regulations requested either a language course, an internship (“praktikum”) of at least six weeks or studying at a university in an English-speaking country. Since my minor subject was Indology, it made only sense to go to India for it. Sadly, there was not much of a regulated exchange, the DAAD (the German Academic Exchange Service) only offered programmes for a year abroad in India. But when I was planning this semester, I didn’t want to leave for that long because my remaining grandmother was old and frail, and I feared very much that something would happen, if I was away for too long. On a very sad side note, by the point I was leaving, she had already died a few months before. That aforementioned situation, however, left me with the only option: planning everything on my own.

To sum this up: I was going to a foreign country, on my own, having planned the trip myself, not knowing whether it would work out as planned, or would work out at all. I was planning on staying at an NGO in the south of New Delhi, where I would theoretically teach children from the neighbouring slum (and non-slum-areas surrounding that NGO), live in a flat share with other volunteers of said NGO and… I didn’t know much more about it. I knew that I was supposed to be fetched from the airport and taken to that NGO. With that scant, but confirmed information (I had gotten acquainted with that NGO via a family member of mine) I boarded the plane and arrived eight and a half sleepless hours later in New Delhi.

On arriving there, I was at first disoriented. You just sense that you are somewhere else, somewhere that is not your home (yet). There is the light, which seems softer. There is the temperature, which is a lot higher in New Delhi than it is in the middle of Germany – and there is the decidedly more humid air, that also smells entirely different. Delhi is breathtaking – in more than one sense of the word... Breathtakingly big for a girl from the village, breathtakingly smoggy for someone used to country-air, and breathtakingly full – full of life, people, colours, options and barriers.

The first barrier is obviously the border/pass control, but that is dealt with quite efficiently and without much ado. From my first visit to India, back when I was still at school, I knew that, after the pass control, I had to get to my luggage quickly, which also worked out fine. The first real barrier I encountered was the missing driver who was supposed to fetch me. I had to pull out my mobile phone and call a very sleepy NGO worker who told me that the driver would soon be there. It meant that I had to wait, alone, for some time at the airport. It also meant many people trying to talk to me, wanting me to take their taxi to wherever I wanted to go, and I was tired, still a bit disoriented and unsure of how to proceed.

I was finally rescued by the driver of the NGO, who assured me in quite well-spoken English, that I had done everything right, that I would soon be “home” and that everything would be okay. Instead, I soon noticed that everything was about to become quite hectic.

The traffic needs some getting used to. I had to brace myself a few times and was mesmerised by how many cars the Delhites manage to cram into a street next to each other when there are only four official lines to go on… One thing had changed, though, since I last had been to India: now, traffic lights actually meant something when they were on. The driver chatted a little with me, showing a few memorable buildings and such, which was nice and calmed me a little. I have to admit that I was not coping very well with my sleep deprivation and the sheer mass of input that India brings with it.

It was morning, so the day was just starting and everybody, the other volunteers and the staff as well, were totally awake and happy to get to know me, while my head was reeling a bit. It all felt a slightly unreal after a while. I got to know the other volunteers – who were also my flatmates –, the staff and the manager of the NGO, and then I was accompanied to the flat where I was going to live by one of the nice volunteers, with whom I would share said flat. He also helped me to drag that impractical contraption called suitcase along the street, which I started to hate at that very moment. The suitcase, not the street. Govind Puri is not the poorest part of New Delhi, but it close to the slum of Okhla and it is definitely not rich. The streets are mostly hard packed earth and narrow, the houses high, towering above you. I would grow to like the area, but at first, you wonder where on earth you have ended up, especially in combination with the tiredness and in comparison to the village I had just left a few hours before. 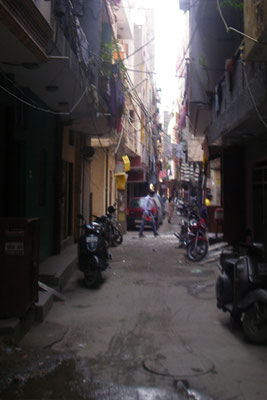 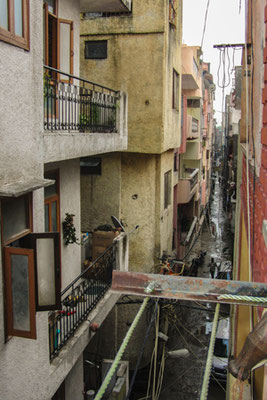 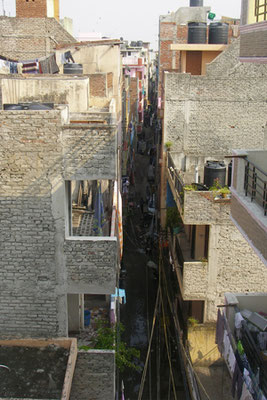 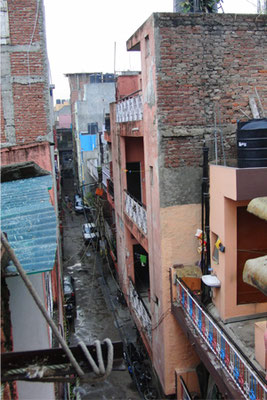 As I mentioned before, Govind Puri is right next to Okhla and slightly to its north there is the famous Lotus Temple, which, I have to admit to my shame, I have never visited. I have seen it only from the outside, but that alone is a scene worth taking in, full of serenity and peace.

After unpacking, we went back to the NGO and I started teaching. It helped to be in a room, talking to people, but I was running on plane-food and adrenaline. After teaching, we, the volunteers, went to the NGO-leader’s home where we had tea and I regained some sense of normalcy, I guess. No screeching horns, a house with a couch, a small garden, some quiet and small-talk. All too soon we went back to the flat in Govind Puri and after a dinner made by the house-mother (She cleaned, cooked and washed for the rent/fee we paid) the others left.

And I was alone again. In a flat that I didn’t know, shouting, honking, other noises I could not identify around me, and my bed was in a room with no windows. I felt suffocated. It was as pitch black as I had experienced it only once before: in the dialogue project of the blind for the seeing in Frankfurt am Main. I could not sleep, I was starting to panic and only when the others returned they were able to calm me down, get me to watch a movie and then drop off to sleep after more than 36 hours of travelling not only what feels like halfway around the world, but more like landing on a different planet on which everyone adheres to a different rhythm of life than you do. This place is so full of life, so full of humans, of noises, of smells, of colours and of difference.

NOTE that by sending me an e-mail you automatically agree to the data privacy statement to be found here: https://thispreciouslife.jimdo.com/j/privacy